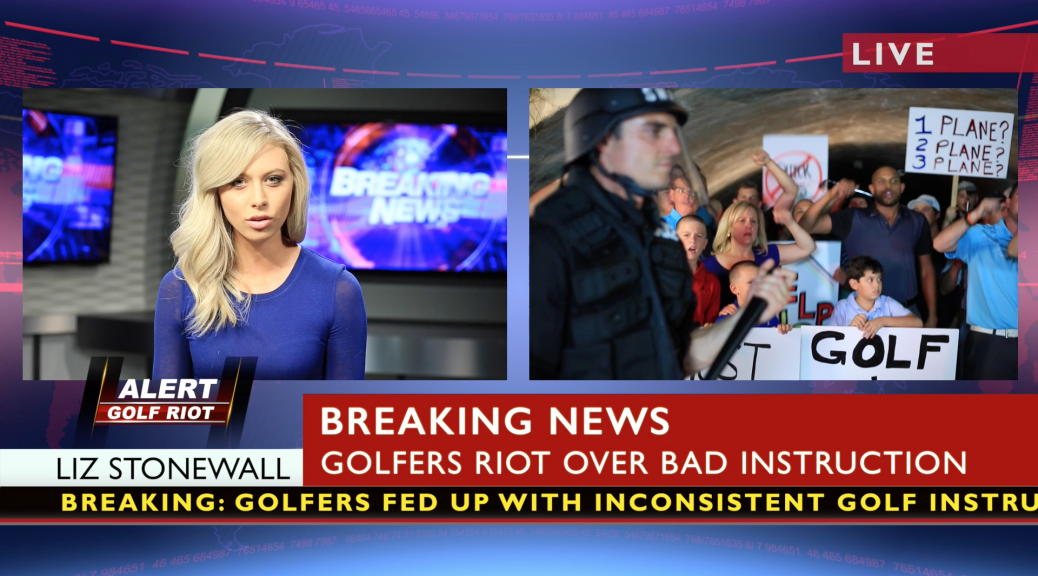 POSTED ON 06 17 IN News, Training Programs BY Tathata Staff • Leave a comment

It’s U.S. Open week, one of golf’s most watched weeks, when amateurs of all ages dream of sinking the five footer to clinch the national championship. And yet, after decades and decades the average golfer still cannot break 100. That’s why this week Tathata Golf, tathatagolf.com, is calling out decades of ineffective golf instruction with the debut of its new national advertising campaign.

Tathata Golf, a revolutionary golf training company supported by notables such as Gary McCord and Brandel Chamblee, is launching a new national ad campaign that will feature several national “mock” spots throughout the summer. The first, The Riot, features protesting golfers who have had enough with instruction that simply is not helping them improve and a soon-to-come second spot, The Verdict, where a judge finds the defendant – golf instruction – guilty. The campaign will include a total of four to five spots and run throughout the year.

Improve and Learn the Game the “Truthful” Way.

The Riot spot debuts during Fox Sports’ Sunday afternoon coverage of the U.S. Open Golf Championship. It also will run in most major U.S. markets. Post U.S. Open, Tathata plans to spend an additional six figures with the Golf Channel prior to The Open Championship (British), inviting golfers to improve and learn the game the “truthful” way with Tathata Golf. The spots will also be shared through social media. All spots will be punctuated with the line: “2016, the year golf instruction changed forever.”

Despite a plethora of scientific and “space-age” equipment improvements and a constant stream of “quick fix” promises, most amateur golfers over decades and decades of time fail to ever improve in any significant way – if at all. Many studies concur. Since 1960, the average golfer still has yet to break 100 for 18 holes (National Golf Foundation) and average handicaps have not significantly decreased.

Bring Joy Back to the Game of Golf.

Bryan Hepler founded Tathata on one simple premise: help golfers and future golfers discover their own golfing greatness and everyone in the great game of golf benefits.

“Today’s current golf instruction model is severely outdated and over time golf has been made difficult,” said Hepler. “It does not have to be this way. With Tathata Golf, our intention is to bring joy back to the game and help all golfers and future golfers discover and sustain their own golf greatness.”