Tathata Golf Reports it has Provided 30,000+ Hours of Training in Six Months 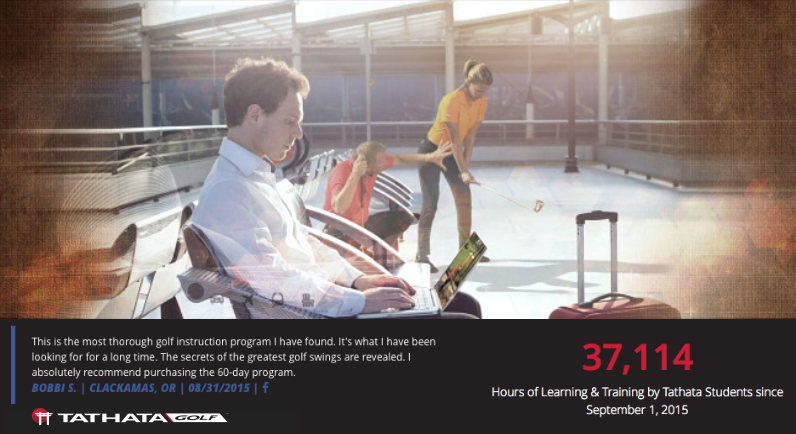 10 MarTathata Golf Reports it has Provided 30,000+ Hours of Training in Six Months

POSTED ON 03 10 IN News, Training Programs BY Tathata Staff • Leave a comment

Tathata Golf currently has students from all 50 states enrolled in the 60-Day Program.

“In developing this program, we wanted a way to provide world-class training to the masses,” said Bryan Hepler, Developer and Founder of Tathata Golf. “We also wanted to help break the three major barriers to learning and excelling at the game of golf: it’s too expensive, it’s too time consuming, and it’s too difficult to learn and excel at. We are pleased at the successes our students have been having since we launched Tathata Golf 60-Day Program six months ago.”

Easy way for newcomers to learn and improve, leading to the growth of the game.

“As people get better, they play more golf. That is what we are offering golfers everywhere and it’s our way of supporting the golf industry.” continued Helpler. “Newcomers are able to learn the game from their living room in days and weeks instead of years through our movement training program without the need for any golf equipment before they get started. This provides a way of easily welcoming and enthusing new generations of golfers that may otherwise have gone missed, ultimately leading to the growth of the game and industry as a whole.”

Highlights of actual user feedback include:

The culmination of 30 years of training, and 5 years of testing, the Tathata 60-Day Program is designed to help players learn and improve at a rapid pace using a unique in-home learning system on their TV, desktop or mobile device. The program offers users a way to learn all of the intricacies of each part of the game in a simple new way over the course of 60 days. Golfers easily progress through a strategically built path of learning to understand and build the movements of the world’s greatest players and athletes combined with timeless teachings from the ancient world of martial arts, teaching students how to build, store and move energy within the body, hands and arms.

During the 60-Day Training Program, golfers learn over 140 incredibly detailed but easy to perform movements through 15 different movement routines to build their full swing, short game and putting motions. The movements and routines are strategically introduced at different points throughout the program, leading students to being able to control a variety of speeds, shapes and trajectories with each club in their bag. These movement routines introduce golfers to a completely new way to train and improve within the game of golf without needing to hit a golf ball or even go to the course, allowing full swing, short game and putting motions to all rapidly improve at a speed rarely seen in the game of golf but common to martial arts and other sports.

Throughout the program golfers are also introduced to movements of the world’s greatest major champions and greatest athletes of all-time and how their movements relate directly to the movements they are learning and performing. At the end of many of the movement routines golfers will be exposed to a very unique form of mental training. These mental training exercises are completely new and unique to modern sports psychology and will shift many people’s beliefs of what they commonly thought they understood about meditation.

“We are pleased to hear how so many golfers are the seeing benefits of the program in such a short time,” added Hepler. “Offered at less than $3 per lesson, the Tathata Golf 60-Day Program can be said to be one of the new tools in the golf world helping to foster the growth of the game through better golf.”

Join the Movement
Facebook2Twitter1Google plus0